Saturday morning we awoke early (hangovers in check) and headed to the bakery before cruising out to Whitehaven Beach for the day. Much to my disgust, the bakery didn’t sell bacon and egg pies – just what I was craving.

I dozed on the top deck for most of the trip but jumped up when Capt. Mikey caught a Blue Fin Tuna off the back of the boat! Fricken Sweet! After that excitement I chilled at the front of the boat, watching the crystal clear water and gorgeous island drift by.

We moored out around Whitehaven and taxied over to the island in groups. While being attacked by giant biting flies we waited for the rest to get over and then began the climb up the hill. At least I can say I exercise sometimes! Must admit I did get super tired though and had a little whinge… all worth it though! 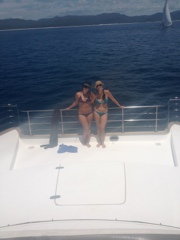 What an incredible view.

We had a mini photo shoot, ‘everyone together, okay couples, smile!’ admired the view a bit longer then made our way down. Back on the yacht, lunch had already been prepared – a yummy tuna salad.

We moved around to in front of Whitehaven, where we saw 2 giant turtles! Awesome.
I then took about 20 photos of Lisa jumping off the boat… I just couldn’t get it right! Of course she got it first shot…

Back on Hamo we headed to the pool bar for cocktails. But it was closed! Seriously, who closes the only open pool bar, with the sun shining and the pool packed at 5pm?! Didn’t matter though, we had the best time anyway! With the discovery of an underwater camera, we were amused for hours, I can not wait to see those pictures!! Between mermaid posing, retarded faces and dirty dancing poses, I don’t think I’ve laughed so hard in a long time. Props to Sean who actually managed to lift me in the air like the Dirty Dancing pose and props to the Swashbuckling Pirate, who managed to catch it on camera!

Brohito’s (Mojitos made by the bro Mike) were served back on the yacht – the most refreshingly, delicious drink you will ever have. I want one now just thinking about it. Then there was a rush to get dinner at CoCa Chu.

We were invited to CoCa Chu by a friend to be a guest of the Chef. Roll out an 8 course tasting menu and I swear I would dine there constantly if it was in Brisbane. Amazing, delicious, inventive, mouth watering, insert additional adjectives here – I can’t rave enough about this place. MUST VISIT on Hamo!!!

0 thoughts on “Yachting around”