I’ve been to Hamilton Island many times before. At Uni, Club Med Lindeman Island (a 45min boat ride from Hamo) used to fly me per from NZ to work for them in my holiday breaks for a couple of weeks.
I also did this same trip last year. Hamo still never disappoints.

Every year my friends hire a yacht. It’s huge, 4 big bedrooms, 2 smaller ‘coffins’ and 4 bathrooms. This year we even had aircon! Whoooo! Anyway they hire it and cruise around the Whitsunday Islands for 2 weeks, starting and finishing in Airlie. It works out super cheap as my mate Mike is an amazing photographer an he gives his pics to the company in return for a discount.

I can never make it for the whole 2 weeks – too busy and all that jazz. Read can’t get additional time off work. So I fly in for the weekend when they moor at Hamilton Island Marina. Fly in Friday and out Sunday. It’s cheap, thanks to jetstar, and I only need one day off.

So we flew in Friday 11am and that’s when I realized that I hadn’t heard from any of them for a few days. When nobody was at the airport to pick us up I had a fair idea that something may have happened.

So we started walking up the hill from the airport towards the resorts. My fantastic plan was to hang at the pool bar until they got there. I forgot how huge the damn hill was. 1/4 of the way up a lovely Samoan guy pulled over in his buggy and offered us a ride. He was a bit shy but we were super grateful.

I’m still trying to get a hold of all my mates and settled with message ‘I’m at the pool bar where we go for happy hour. Ph dying, come get me when you arrive.’ They would know exactly where I am. Shame ph was dying – story I my life. I really need a new one.

The Swashbuckling Pirate & I had a lovely arvo, cocktails in the pool bar, kayaking around the bay and more swimming and cocktails.

Hilariously the whole ‘I lost my friends & my boat’ thing worked on my favor. I got the kayak hire cheap as when the guy asked were I was staying I launched into my story and he threw in free locker rental. Lovely guy.

Come 3.30pm I was starting to think that we should look at getting a hotel for the night- we still hadn’t heard from them. Reception gave us the brilliant idea to call the yacht charter company, which we did. They knew the boat had had some issues and had sent another boat out to help it. Unfortunately they were out of signal so weren’t sure of they’d make it to Hamo in time or not. They said wait an hour and see if they call in. So we waited. Still no word. Swashbuckling P decided we should wait another half an hour with a cocktail by the pool. Who am I to argue? With a cocktail in hand we waited.. And it paid off! Sean messages saying they would be arriving into marina in half an hour or so…. What he really meant was 1.5hrs but we weren’t to know.

While we were waiting we walked back to the shops/marina. Me, always hungry, decided we should snack so I went and got us creamy Brie and crackers to snack on.

After a while we were surrounded by birds. One super curious duck and then some sea gulls. I’m not sure at what point I noticed all the cockatoo around us but there were 6 of them and they were gently taking the crackers from our fingers and then nibbling on it. They even say on our legs. Pretty damn cute. I got a bit photo happy haha.

Cue the yacht arriving and it was all go- settle in, shower, change, drink and to the Yacht Club. I’ll write about that experience later, but in short – don’t go there.

Back to the Yacht for some drinks then up to Bohemes for some dancing. Everyone rocked out and had an awesome time- I think we were the first to crawl into bed (after hot chips of course) about 2.30am. 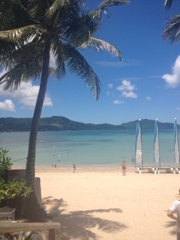 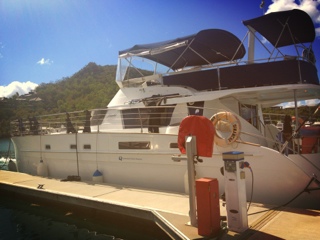 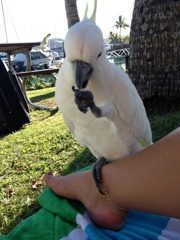 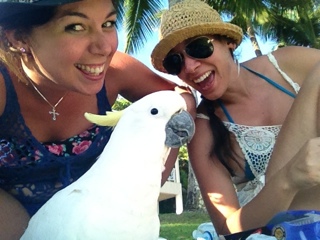