We had intended to get up at 9… But with hangovers as bad as ours, coupled with jet lag, we ended up sleeping until 11am.

Gemma then decided to spew, and wouldn’t even get out of the bed to do it. I nearly gagged haha, so yuck. I hate people spewing in beds, beds are for sleeping.

Being the anniversary of 9/11 we headed to the World Trade Center to pay our respects. The place was packed and had quite an eerie feel. I was covered in goose bumps.
The memorial centre was closed to the public, open only to family who had lost their loved ones. 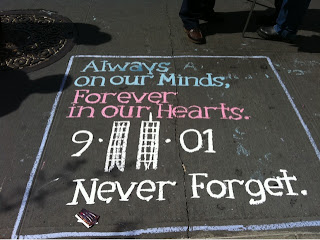 We caught the subway to the Staten Island Ferry to check out the Statue of Liberty, as it was another sunny & warm day. We didn’t last long on the Island, after a delish turkey sandwich we were on our way back again.

When we arrived back at the hotel we thought we would have a nap before we made our way to watch a Broadway show. Long story short we never made the show! Instead we napped for a few hours and then went to Union Square for dinner, drinks and dessert. I think the jet lag may have finally caught up on us!