St Thomas was our second stop on the trip and the first time the weather wasn’t fantastic. Not that it was bad, just a few showers and a little overcast. 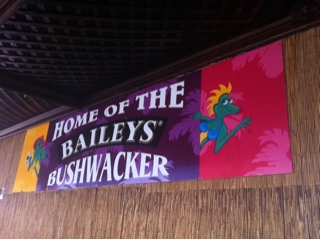 Lisa, a friend who has worked on a cruise ship in these waters suggested we didn’t do a planned tour on this island and instead caught a sky ride up to the top of the island to check out the view and have one of the famous drinks they serve at the top.

When we arrived we decided to do sine shopping first as I wanted good pics from the top and it was pretty overcast.

In town a guy rounded us up to go visit a jewellery store. He may well have been Bob Marley’s cousin with his dreads, rasta outfit and smooth talking. Anyway he was we decided to check out the store. I was looking for a rose gold ring anyway so it made sense. Have I mentioned that jewellery is super cheap in Caribbean and Bahamas due to being tax and duty free? 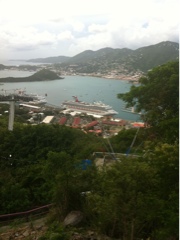 Anyway I was looking at the bands and the owner comes over to me and says ‘I have the perfect ring for you’, as they do. Except he did. Rose gold with a chocolate solitaire surrounded by 4 white diamonds either side and a hefty discount, I was I love. I said I’d think about it however as I wanted to look around make sure I didn’t see anything I preferred more.
After looking around a bit I decided I wanted it, only to realize I hadn’t bought my credit card with me! I would have to go back to the boat and get my card then make my way back to downtown. This sounded like way too much trouble so I concluded to leave the ring as there would be many more like it, right? Wrong. I should have bought it then and there. 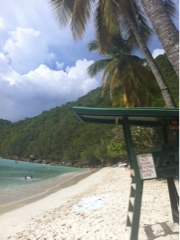 By that time the cloud had cleared a bit so we made our way to the sky ride and to the peak of the Island. There were fantastic views and Gemma had the famous Bushwacker drink which comprised of various liqueurs  mainly baileys and kahlua. It was too creamy for my lactose intolerant stomach so I settled for a few sips of hers and an amaretto sour.

We took a taxi to Maghan’s Bay, one of the top ten beaches in the world of which St Thomas is home to two. The road is narrow and windy and our driver took it at a slow pace which was nice as you had to beep before corners to ensure no oncoming traffic!

You have to pay $4pp to enter Maghan’s Bay but it is worth it. The water itself is turquoise and clear with a lake like quality in that there were no waves and seemingly no current. There are beautiful palm trees and white sand along a crescent bay. We sunbathed and swam until it was time to get back to the boat. 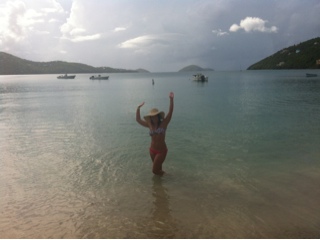 That’s when we met John. John was on the other boat on port. John was on holiday with 10 or so friends and relatives from North Carolina. Archerfield or some where that sounds like Archerfield. Anyway we ended up in a safari bus with him and his entourage. 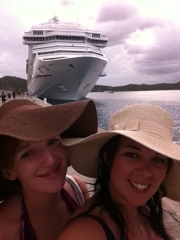 There were 16 of us packed in with open sides. This driver didn’t care so much for the roads and drove at a fast rate. John and co didn’t mind, they thought it was great fun as they were all on their 10th rum for the day. St Thomas is also the home of Bacardi. I was a little nervous we were going to roll but we made it safely, not without a little drama though!
One of John & co had become engaged and one had renewed their vows this day so they were all in great spirits and reasonably trashed. The father invited us to stay with them for as long as we liked and the daughter told us she loved us. Then she fell asleep. Then she spewed. Haha I haven’t moved that fast in ages, she was sitting right behind me! The spew was orange and just kept coming. Needless to say when we eventually stopped at the port we all but ran away. Guess we won’t be staying in North Carolina after all!

Back on ship we had our first elegant evening. Everyone gets dressed to the nines, apart from us as we had nothing elegant to wear. It was beautiful to watch and the lobster dinner was delicious!