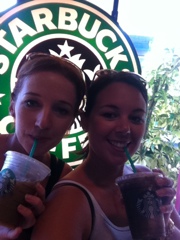 I thought getting from Miami to Orlando would be easy. I thought there would be buses and trains aplenty connecting one major city with another only three hours away. I thought I would just wing it when the time came and all would be well. I thought wrong.

When we arrived in Miami on the ship at 8am it was black outside. There was a massive storm right over us. At breakfast we sat by the window and watched the city light up with each lightening strike. The rain was steady and the thunder loud.
We were estimated to be off the ship by 9am but due to the weather there was a wait and we weren’t off until 10.30.
The night before I asked guest services how to get to Orlando. They were blasé, said hire a car or head to the bus station, it would be easy.
Being completely relaxed after the cruise (read lazy) I decided I wanted a shuttle to collect us from the port and take us to the hotel. So I started googling. I’m a pretty good googler. Soon enough I realized it wasn’t going to be easy.
20 websites and 10 phone calls later (perhaps a slight over exaggeration) I found a ‘luxury coach line’ and decided to jump on that. We had to take a taxi to their depot and the bus was $50 but dayuum it was nice!
Huge leather, fully reclining chairs with electricity points and wifi. Was a comfy way to spend the 5hour bus ride. Red Coach Bus lines USA is the company if you’re ever stuck.
Anyway we get to Miami and promised a taxi has been ordered. Wait 20mins, a town car driver pulls up and promises ours is on it’s way to us now and won’t be long. Fast forward an hour and still no taxi. Town car driver pulls up apologizing profusely and offering discount. Lucky is was a Chevvy Suburban and I was distracted with the pretty-ness of the car and forgot how mad I was at the wait. I hate waiting. Think I got that trait from my Dad! 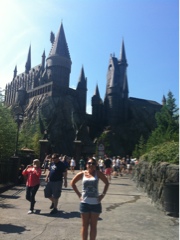 I have decided I have Post Cruise Blues. A disorder one contracts when leaving a ship that had immaculate customer service and being thrown into the world of poor, crappy customer service.
It’s not that bad really. Customer service as a whole in the US is fantastic as the service industry employees are always trying to get tipped. Maybe it’s just Orlando.

The reason we came to Orlando was to check out the Wizarding World of Harry Potter at the Islands of Adventure theme park next to Universal Studios.

I must admit that I have been pretty excited about heading to the Wizarding World of Harry Potter.
So much so that I even dreamt about Harry the other night on the cruise. I often have vivid and crazy dreams but this one was hilarious so I will share it.
Okay sooo in my dream I made out with Harry hahaha! I don’t find him attractive in my waking life but evidently sleep me does.
The dream gets better, Heath Ledger was his brother and I made out with him secretly behind Harrys back! Haha then I was so scared Harry would find out that I bewitched my bright pink sneakers (which I don’t own) to run me as far away as fast as possible. Seems I had powers in the dream too. 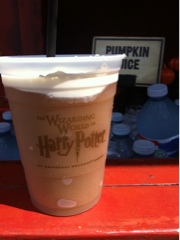 I was pretty excited yesterday. May have something to do with my sugar diet though. I don’t usually have a lot of sugar, I eat reasonably healthily but before lunch this is all I had:
– a red bull 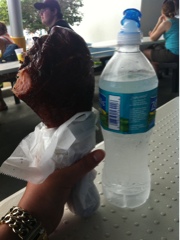 – a double choc chip frappacino from Starbucks with extra choc sauce and no cream
– a Butterbeer, as in the what they drink at Hogsmeade in Harry Potter. They are quite possibly the most scrummiest drink I have ever had in my life. And I’ve had a lot of drinks! They are butterscotch/ caramel based and oh so yummy!!
– a cinnabon roll. Try these – they’re so delicious
-some cookie dough fudge
-a turkey leg. Of which I only ate a little as it was too salty
-another Butterbeer

So I was bouncing off the walls on a sugar high and when the sugar coma started to set in I would just top up with more sugar. Win win.

We arrived at Universal Studios and finally got into the Islands of Adventure. The park is split into themes, Harry Potter, Jurasic Park, Hero Land, Dr Seuss etc.

We headed straight to the Harry Potter part as weren’t disappointed. It’s awesome. I may have squealed a little like a child. You walk straight in and see the castle, followed by Hogsmeade Village and the train station. 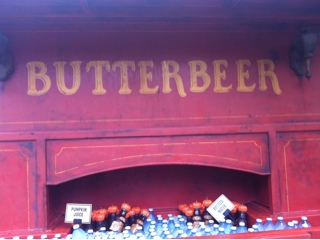 You can buy Pumpkin juice and Butterbeer, which as I previously mentioned is utterly delicious.
In Honeydukes you can get all the HP favorites. From choc frogs to fudge flies, everything is there.
The rides are amazing. The first one we did was a roller coaster ride, something to do with running away from dragons. Holy crapballs it was fast! But it messed with my blood pressure (there may have been warning signs which I may have ignored) and I was really dizzy and light headed/footed afterwards. 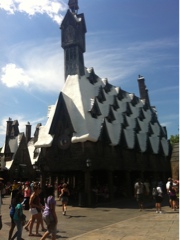 The HP simulation ride is just amazing. I didn’t even know the technology to do that stuff is around. You’re riding around with Harry, then being chased and it’s pretty scary. Unfortunately for us the ride mis-functioned and we were left hanging mid air for a few minutes until it resumed. Luckily we were sitting with some nice boys to keep us calm! In the ride photo Gemma actually has her hands over her eyes haha she didn’t like the spiders.

The other rides were just as good, spiderman ride is awesome. I kept getting motion sickness and dizzy but still managed to do lost of the rides. Gemma even talked me into getting completely drenched in one. Good news for the boys as I was wearing a white singlet! 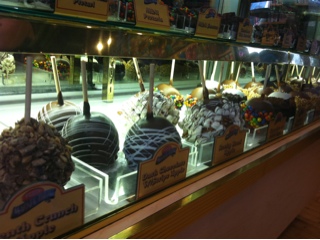 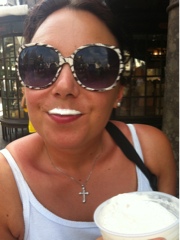 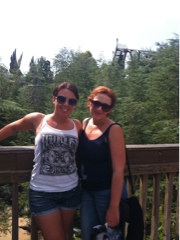 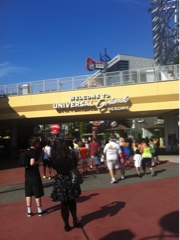 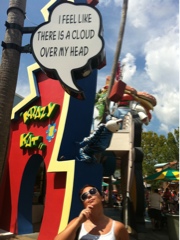 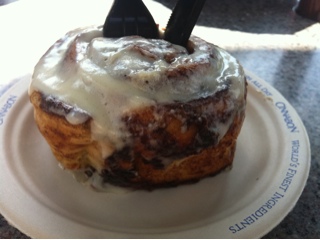 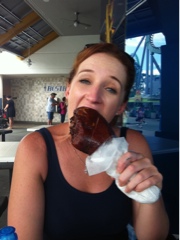