I’ve wanted to go to Wagaya in Fortitude Valley for quite a while.

So after the disappointing draw of the Bledisloe Cup, we were happy to find it still open. 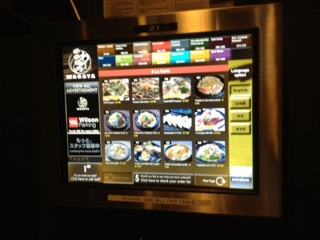 Wagaya has an awesome interior, sleek dark wooden booths that are private and contribute to creating a cool ambience.
It had touch screen menus, which are quite funky and savvy but some would argue take away from the excellent traditional Japanese service that we have grown used to.

The gyoza were delicious. I love dumplings a get them wherever I go and these ones were very good. Highly recommend.

The sushi however was average. You can definitely find better for cheaper in Brisbane.
We shared a The lightly grilled salmon sushi, a spider roll and a dragon roll. 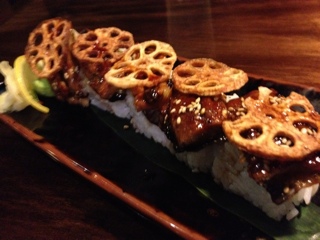 In the picture on the menu the dragon roll looked like it was covered in salmon so I ordered it in a rush from the screen as the kitchen was closing at 11.15pm.
When the plate was delivered I asked the waiter what was on the sushi as it definitely wasn’t salmon. Turned out it was eel.
I have tried smoked eel as a kid… But this just did not look appetizing, even covered in BBQ sauce and sesame seeds. I wasn’t game to try it first so Nikita took the plunge.. The look on her face was priceless.
A look of disgust and horror followed by ‘no, no, no, nope’ combined with vigorous head shaking confirmed that it was a gross as it looked.
Once she told me it had the texture of fat with the smell and taste of strong fish there was no way that any was going past my lips!!

So if you just want some dumplings and a cool interior head here. If you’re after more than that, there are many other Japanese restaurants in Brizzy that would satisfy your cravings.