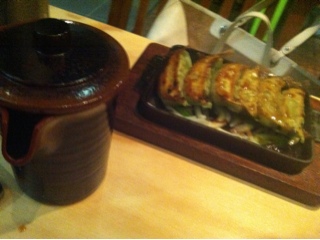 Gyoza is yummy! Nice and soft and fresh but pan fried and crispy too! You’d hope so though, considering it is a gyoza joint.  It comes out on a sizzling plate, with onion and capsicum garnishes. The waitress then pours the sauce over the top, a delicious citrus, soy.  We went for the chicken and vegetable

You do have to wait a while for the dumplings to cool, which if you’re like me and impatient to eat your food, it’s hard work.

Only note would be that I thought there would be more varieties. There was no beef or duck which I would consider to be staples.

We tried the crab claw balls – they were good and then the chicken teriyaki karage. Teriyaki sauce was delicious and if my Mum was there, she would have told me off for classily dipping my finger in the bowl to get extra sauce!
We also had the edamame, which unusually, was served cold.
Staff were attentive and the décor is very Japanese, that dark wood feel their restaurants often have.

Cheap meal though, worked out to $17 each for three of us, and we were all full to pop by the time we were leaving! 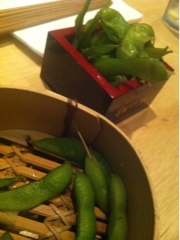 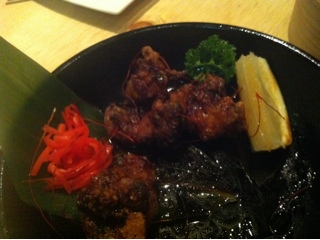