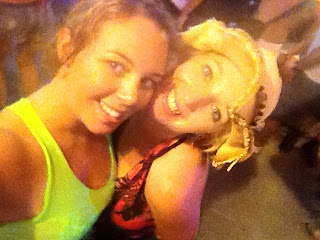 We spent NYE day shopping and having massages, foot scrubs and pedicures. Nice and relaxing so we would be all ready to party the night away at the Koh Phagnan New Years Full Moon Party.

The other 2 girls came over at 3 to start getting ready as we had booked to be picked up at 5pm from our hotel. That way it would still be daylight on the speed boat over to the island. 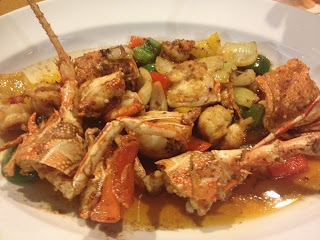 Come 5pm we were sitting in reception all ready to go. That’s when the storm started to hit. It poured down so heavy that the path between the hotel and the rooms immediately flooded. The hotel had already sandbagged out the front by the ocean. Should have really taken that as a hint.

Long story short, we waited and waited and the transfer was over an hour late due to the weather. On the drive there we had to stop constantly due to flash flooding. There was thunder and lightening, it was getting dark but the sky was already cloudy and black. 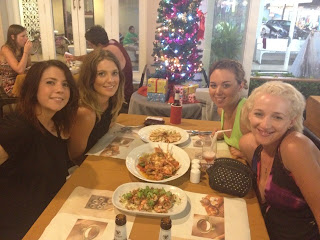 When you arrive you have to sign forms and pick up your tickets. Rosie and I both didn’t sign and weren’t keen to go. Gemma wanted to go and Nikita was on the fence.

Finally we decided it wasn’t worth risking the boat trip in the dark, in the storm, in an open boat where we would be soaked. Turns out they cancelled all the boats going over just after anyway. Curious to know if anything happened to the other ones. 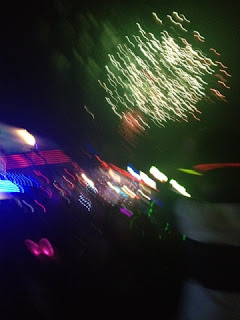 So instead we headed back to Chewang and spent all our remaining boat money on seafood! Lobster, crab, garlic butter mussels, soy prawns. Amazing. We met some English people, joined their party and did shots for every time zone – NZ, Brisbane, Melbourne and Perth. Needless to say we were half cut and I still hate tequila with a passion!

Fast forward some drinking games and we headed back to Ark Bar. Realized it was 9pm and we were all well and truly half cut!

No idea what we filled the next 3 hours with.. Drinking and dancing in the beach I think.

Fireworks were awesome. Beautiful, right over the beach. After the countdown I was starving so went and had some Thai. Gem was pretty wasted and sleepy after eating so she went home and we kicked on at Green Mango until 3 or 4.

We all slept in one room, the 4 of us girls. Was great empathy for our roaring hangovers that we were all sporting.

An awesome way to see in the new Year!

0 thoughts on “A Thai New Years”