Remember that date I had from Tinder where my date’s fiancé showed up, beat the crap out of him and ended up with police statements? Well this doesn’t quite rival that but it’s fairly close.

Internet dating has its pros and cons of course, and I’ve had my fair share of both. I love meeting new people though so it’s rare I come away thinking I’ve wasted my time or that the date was a failure even if there isn’t going to be a second date – and nine times out of ten there isn’t.

Get in to the story I suppose you’re thinking! So… I went to yoga in the park in South Bank (which was awesome by the way – thanks MediBank), arrived home and began to cook. At which time I also checked my Bumble (similar to Tinder but better if you ask me) account… as you do. A guy, let’s call him ‘Fred,’ had messaged a few minutes earlier asking me to dinner that evening. I replied that I already had dinner on. Long story short he persuaded me to meet him for Italian. Being post-yoga, I was ravenous so suggested we meet in 20ish mins.

I arrived at the restaurant and Fred is seated enjoying some water. He immediately apologised for a dry cough and explained it wasn’t contagious. Slightly awkward, but whatever. Fred is convinced food will help so we ordered garlic bread to get started.

The garlic bread didn’t help. Turned out Fred has low blood pressure and is concerned it might be related. Also turned out, Fred had been at the doctors earlier that day but after an hour wait, had to get going to a work appointment. Also, also turned out that he’d had the week before off to cope with this new medical condition that had something to do with a heart condition.

By this stage I was fairly concerned. Our mains had arrived and my new friend Fred is coughing up a storm, could barely speak, let alone hold convo and had turned pale and sweaty.

He cut the date short, apologising and I offered to take him to the doctors. Or hospital. He replied he had drugs to take at home and could I take him to his apartment as his flatmate had moved out as they were about to move, and could I also wait ten minutes to make sure he would be okay.

Looking back I should have just called an ambulance. Hindsight – great thing, right?!

Instead I asked his address, sent it to my flatmate, told him my flatmate would be picking me up soon and I was sharing my live location. Gotta keep safe!!! I could genuinely see this guy not only needed help but was really scared too. I made the right call but if I was in the same position again, I would def. just call an ambulance.

So we walked back and he was not doing well. Struggling for breath, I was worried he would collapse. We got through the door (me sending constant updates to my flatmate, David) he grabbed his drugs, landed on the couch and tried to pull it together. I made him take off his tie and undo his top shirt buttons. I then told him stories for 20 minutes to help him relax. I tried numerous times to take him to the doctors.

Eventually he relaxed and he (and myself) felt a lot better. Told me I could leave. I waited another ten minutes then I made him get his phone charger and put it beside his bed with some water and to relax.

He came outside with me and (hilariously) tried to kiss me not once, not twice but three times!!! He couldn’t understand why I wasn’t interested and asked if it was coughing. I responded that I was concerned he would pass out! But I was really thinking, ‘Mate you’re kidding! You take me on a date, nearly die, put me in a potentially compromising situation, I practically have to medicate you and then you think I want to kiss you?! Ha!’ Saved by the bell, my uber turned up.

I got home and worried all evening. I so wished I just took him to hospital. He messaged that he was okay but obviously I was still concerned.

He messaged in the morning he had a bad night and was going to docs. They sent him straight to emergency and when I left for Vietnam a few days later, he was still in hospital.

I do feel for him, I’ve been in situations where I’ve feared for my health and been alone and it’s exceptionally scary. A first date def wasn’t the right place to seek help though! He later messaged me he shouldn’t have gone on a date that night. No shit Fred.

A huge thanks to the support of my flatmate Dave, ensuring sure I was safe, letting me vent and listening to me fretting until I heard from Fred again.

I wish Fred a swift recovery and hope he understands when I refuse a second date!

UPDATE: Fred did not understand and continues to contact me… 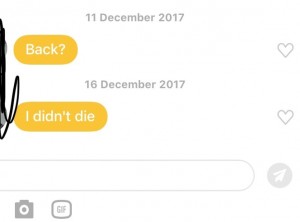