I’ve recently started a strange diet called FODMAP. Strange is probably an unfair word… inconsistent, annoying also hard work. But I have found it does work.

Why am I on it?
Well, I traveled a lot last year and I had a lot of gastro-like episodes from Asian and Pacific countries. I went to Vanuatu in early December and a month later was still being ill most times I ate and seemed to be weirdly (you’d think the opposite when food goes straight through you) gaining weight. Doc suggested that I have IBS-systems and should try the FODMAP diet.

What is it?
The diet was developed by Monash Uni, so I’ll let them explain…
FODMAPs are a group of sugars that are not completely digested or absorbed in our intestines. When FODMAPs reach the small intestine, they move slowly, attracting water. When they pass into the large intestine, FODMAPs are fermented by gut bacteria, producing gas as a result. The extra gas and water causes the intestinal wall to stretch and expand. Because people with IBS have a highly sensitive gut, ‘stretching’ the intestinal wall causes exaggerated sensations of pain and discomfort
Put simply, FODMAPs are a collection of short-chain carbohydrates (sugars) that aren’t absorbed properly in the gut, which can trigger symptoms in people with IBS. FODMAPs are found naturally in many foods and food additives.

What does it mean?
There’s heaps of foods you need to eliminate (most gluten, dairy, and fructans, fructose etc) from your diet to avoid IBS-like symptoms. FODMAP stands for “fermentable oligo-, di-, mono-saccharides and polyols.” There’s still heaps of foods you can eat but it can make dining out annoying, especially when you can’t have garlic and onion – which seem to be in bloody everything.

I google pretty much everything I eat. Thankfully there’s heaps of information online about it and I’ve started noticing the ‘FODMAP friendly’ logo in the supermarket.

Here’s some of the food lists from Monash – I’m low-FODMAP on the green side. 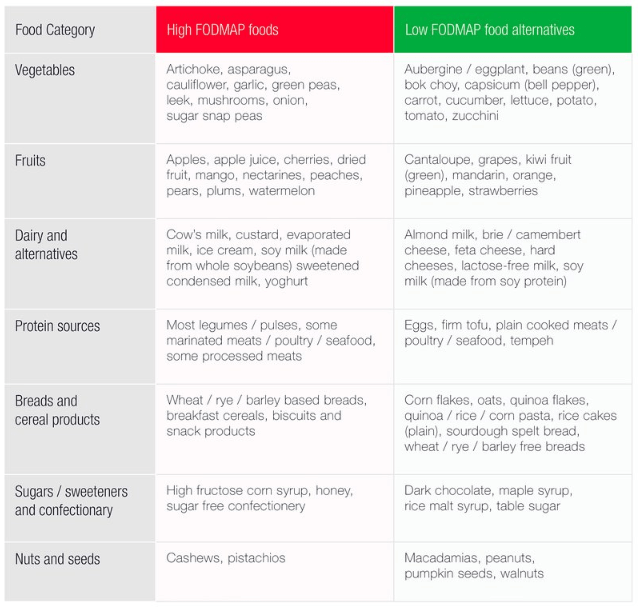 What do I eat?
I’m eating lots of meat and vegetables.. so bbq lamb, beef or kangaroo with corn, zucchini, and salads of rocket, tomato, parmesan/ feta with lemon and salt and pepper. Seafood is an easy one. I’ve found some decent GF pasta and of course, you can have rice and quinoa. I’ve just found I can have rice cakes which is exciting! Means I can make cracker-like meals with tomato and avo, cheese and ham. I eat lots of berries and have eggs for breakfast.

There are lots of ‘rules’ around food quantities so while I can have avocado, I can only have 1/4 at a time. And a third of a corn cobb. I ate a banana the other day and swelled up huge – turns out while you can eat an unripe banana, only 1/3 of a ripe banana is recommended.

Eating out can be super tricky. I have found steak restaurants, greek food and seafood are best as they’re relatively simple and you don’t have to request for too many changes. The other one that can work is GF at Italian restaurants or a risotto that’s dairy free too.

Is it working?
Yes definitely! I’ve lost a bunch of weight (which was possibly just inflammation/ bloat anyway) and feeling heaps better on FODMAP. I have less stomach pain and I’m running to the bathroom less which definitely makes life easier. I’m at the three-week mark so have three more weeks of elimination of foods to go before I can start integrating some of the ‘banned’ foods back into my diet and seeing how I react.

I get heaps of questions about the diet so feel free to ask away!

I’m going to write a blog of places to dine out in Brisbane too as I haven’t found much.