So often I am asked the question, why do I choose an Uber over a taxi?

For me, the answer is simple. Uber outshines cabs in every single area of competition.

Let’s start with the driver. The Uber driver is courteous, polite, speaks great English, offers you water and mints. They even change the music channel to suit you, your preferred air temperature and most offer a mobile charging service. Try get any of that with a cab driver!

The next obvious one is the car. The Uber car is clean, doesn’t smell and is inconspicuous. It may not always be the biggest or top model but I would choose them over a stinky, old Ford Fairmont any day!

Please keep in mind that I am basing this on Uber X, the most basic form of the Uber service. Get me started on the benefits of black and we will be here all day.

Why so much pride in their presentation? Well, much of it has to do with the fact that they are rated at the end of the ride. But guess what, so are you! If you have a bad rating, good luck getting an Uber. I love a system based on mutual satisfaction and appreciation.

You don’t have to pay at the end. Well you do, but no money exchanges hands. The bill comes straight off your credit card which is preregistered on the app. You pull up at your destination and you are off! You can also split bills with other Uber users – try doing that in a cab. If you’re like me and travel for business and are terrible with receipts this is another life saver – they email you your receipt. You just forward that bad boy on to your accounts and you’re done! Don’t even get me started on the paper you are saving. Oh!! AND you can have more than one card registered – ie, I have both a personal and business card registered. Brilliant.

The biggest thing for me though? I feel SAFE. When I hop in an Uber it is geo tracked, the app knows exactly which driver is driving me and where to. I can share my location to anyone on a smart phone – they can see exactly where I am at any moment. Cabbies will try kick me out when I am going a short distance – Uber drivers are happy to accommodate.

They are a disrupter in the industry, and being a marketer, I love that. They are making some great alliance partners and their campaigning is pretty sweet too! I can’t help but gravitate towards them.

Not to mention they are starting Uber Assist to aid disabled people and they employ many mature drivers who have difficulty finding employment. Win-win. In fact, the man who drove me home tonight drives as he is bored in the afternoon and had run out of things to talk to his wife about. His Uber escapades supply him with endless tales. **Collective sigh.**

Oh and, it is cheaper than cabs by a while. But even if it was the same cost or more, I would still take it. The cost is not where I see value here.

So when you ask me would I rather take an Uber or a Taxi, there is zero thought required. Uber all the way, baby! 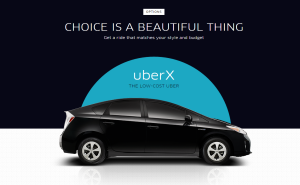 What’s the cost of forgetting your flight time and realizing with minimal time before check in closes? Well if you’re in Tokyo 20,000¥. That’s $200aud.

Seiji and I had a wicked day and were in the post shop in Shinjuku purchasing stamps to post my postcards. We were heading to Yoshinoya afterwards for a casual dinner before I needed to be on the bus at 6 for my flight at 10.55 to Gold Coast. The bus takes 2 hours and is only 3000¥ or $30aud. It’s my preferable transportation to and from Narita Airport in Tokyo as its comfy, cheap and reasonably quick with lots of departures.

The 6pm bus would get me in at 7.55, well before I needed to check in for my flight. Thank god for Seiji’s planning skills and attempt to get me there early otherwise I would never have made it.

How many times have I said why am I always that lady running through the airport?

Back to the post office. There was a bit of a queue so I began flicking through my pics from the day. That’s when I came across a screen shot of my itinerary. You see, I’m very organised and keep copies with me as images on my phone so I’m not rummaging through pages of paper to find the right piece. Well, I was very confused. This particular screenshot said that my flight was at 8.25pm.. 2 and a half hours before I thought my flight was. I read it again before a plethora of terrible curse words ran out my mouth. Lucky no one speaks English! No one apart from Seiji. He looks at me with a funny expression and goes ‘what?!’ I curse some more before explaining my mistake. It’s 5.15 at this stage.

We quickly run through my options while Seiji tries to calm me. I really don’t get frazzled very easily but I hate making mistakes and this one was reasonably annoying and potentially expensive.

My saving grace, well one of many is that Jetstar actually only have a one hour check in cut off pre-flight. So I had to be there at 7.25.

My other and only viable option was a taxi. And they are at the very least 20,000¥ or $200aud. However they are slightly faster than a bus.

I briefly considered missing my flight but I literally had a few minutes to make my decision and run, time was of the essence. In hindsight I almost wish I did miss it and claimed travel insurance with a nice hotel but that’s why they say hindsight is a great thing and not foresight right?

Seiji was amazing and convinced a taxi driver to take me to Narita for the 20,000¥. He told him I was in a big rush and I needed to get there before 7. He even arranged for him to take the highway and all tolls to be included. Impressive work.

Thankfully I had quite a bit of Yen left so ran across the road to the 7/11 and took it out. I mean RAN. I don’t run much but it was a special occasion.

The taxi driver, lets call him Speedy Gonzalez, or SG for short loaded my luggage, while I said a brief farewell to Seiji and before I knew it I was on my way.

We zig zagged our way out of Shinjuku, SG doing a great job and was soon in outer Tokyo then on the highway. I was impressed.

I was also impressed he was sitting at 100km in and 80km zone. Very thankful that he understood the situation I was in and my haste to get to the airport.

Little did I know old SG had a lead foot. Soon enough we were sitting between 130 & 150km the rest of the way to the airport!

I only noticed his speed after a near miss and heavy beeping/ swaying as we nearly changed lanes into a mini bus. SG didn’t have a flash taxi. It was small and older and windy as can be outside.

That’s when I got nervous. I asked him to slow down, 120km was fine -but he just turned around and smiled – nice man, SG. Doesn’t understand a damn word of English.

So fast and furious it was. Car in front going to slow? Change lane and over take. Turns around and offers me a smokes & a lighter – no thanks – very considerate but please stop swaying the car and watch the road, SG.

I breathed a massive sigh of relief at the airport.
1. I could get out of the fast ad furious taxi and
2. I made my flight with time to eat before I boarded!

Thanks, SG, you crazy man you.

Next time I will be double checking my flight time. I think the bus is just that little bit more comfortable…