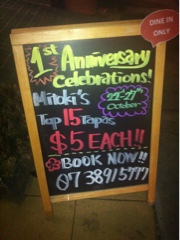 Nestled in the heart of Kangaroo Point, diagonally across from the Story Bridge Hotel, you will find Mitoki. A cute little open aired Japanese restaurant with iPads to order from. The staff are of course, all Japanese and as they all are, extremely polite and sweet.
To celebrate their first birthday Mitoki had 15 of their favourite Tapa’s for $5 a plate. High five for us! Here we were expecting to pay a fairly decent amount for a nice meal and they say $5.. we say 10 please!
We started with 3 plates of the grilled salmon sushi, our personal favourite. I love the stuff.
Of course I had to get the gyoza, which to be honest wasn’t as nice as it could have been. The edge of the pastry was a bit dry or hard and the meat wasn’t amazing. 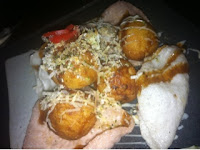 This was followed by Octopus balls which hilariously J, who hadn’t tried Takoyaki before, decided to put all but the whole ball in her mouth… followed by her gagging and spitting it out with ‘there’s something in it!’ Of course there is something in it, it’s an octopus ball! It has octopus in it! She didn’t like the feeling of the tentacles against her tongue evidently.
We also had edamame (a staple) and beef carpaccio (which was very similar totataki) with an Asahi beer. Nom.
The cheap tapa’s deal runs until the 27th October and then the prices are back to normal.. So go there.. go there now! 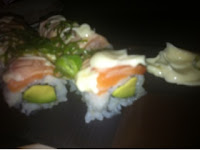 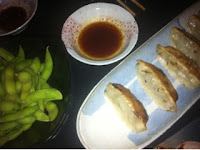 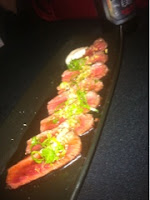