On Friday I had the pleasure of being invited to be a guest judge for a latte art competition with The Coffee Club (TCC) at their Brisbane HQ.

The event was held on their rooftop in South Bank, the sun was streaming down (ahhh Brisbane, you make me so happy), the coffee flowing and TCC crew were in fine spirits. Fitting I was a latte art judge when I take more pictures of coffee than I drink!

The setup was impressive. Expansive views of the city set the scene among TCC banners, two official judging tables, two barista stations, a rockin’ emcee and a big screen TV live streamed from two different cameras to show all the action.

Adam from Lion Nathan was my Judge-In-Crime and we had a blast! We were the Latte Art judges for the inter-department competition. We had so much fun and I learnt a bunch about latte art judging. For instance, you need to keep an eye out for…

It was a tough call but in the end Sharon took out the competition. The best part of it all? Watching TCC departments get into it and support their colleagues – they were having a ball and it was contagious.

By the time the beer and pizza came out the other competition (the main event), the barista competition was in full swing. With three World Latte Art Competition Judges in attendance it was an amazing experience for all of the contestants.

Craig Simon, an award-winning barista and roaster (Australian Barista Champion 2014 and 2012, fourth-placed World Barista Championship 2014, licensed Q grader, Veneziano Coffee Roasters head roaster 2010-2012) held an impromptu latte art master class. I thought there were a lot of camera’s out for the competitions, but this was like a media call!

Congratulations to Sara who took out the top prize and thanks to the crew for inviting me in to see the awesome culture they are fostering – full of passion and pride.

I was lucky to attend the opening day of the extension at Westfield North lakes on the 17th November, including checking out the new Coffee Hit North Lakes Cafe.

The Laksa sauce tasted great and paired with the fresh noodles, asian greens and tofu it made quite the dish!

I must say, I’m not normally one for tofu (apart from agedashi) but it was really good in this combination.

My soy chai latte was sweet (just how I like it) and they had almond and soy milk to choose from. Almond was the call of the day.

Loved the funky graffiti on the walls and the staff were polite and helpful.

I was also able to watch a roasting session with Craig Simon who is a 2 times Australian barista champion! He’s an ambassador for Coffee Hit coffee and I learnt a lot about the process. Having a roaster in-store means the coffee is always fresh and you just can’t beat that smell!

Looking forward to dropping by next time I’m in North Brisbane.

Did somebody say fantastic coffee & easy, healthy, scrumptious lunches?! Yeah they did.

Checked out a great new cafe, Project 41 Cafe, in Bowen Hills last week with a few of the girls from work. Not far from the Royal Brisbane Hospital.

The cafe itself is bright with lots of natural light and a cool breeze. Simplicity with funky twists for the interior design. Rad graffiti art on the wall – definitely Insta-worthy.

Almond milk – tick! I’m a big fan for an almond chai latte. The girls said the coffees were on point.

Anyway on to the good stuff – the food.

I ordered the peri peri chicken salad, which was nice and light with the contrasting crunch of the corn chips and a hit of peri peri at the end of each bite. Delish.

Ceri ordered the sweet potato and brown rice salad – which was perfect as she is GF & DF. Kris was beyond excited with the 14 hour BBQ beef brisket tortilla.

We all shared the poached chicken salad, which I probably wouldn’t have ordered on my own, but the combination with the ricotta, kale and almonds was my fave dish.

Heading back again for lunch tomorrow.

Ps. Apparently breakkie is awesome there too – report back next week on whether the rumours are true! 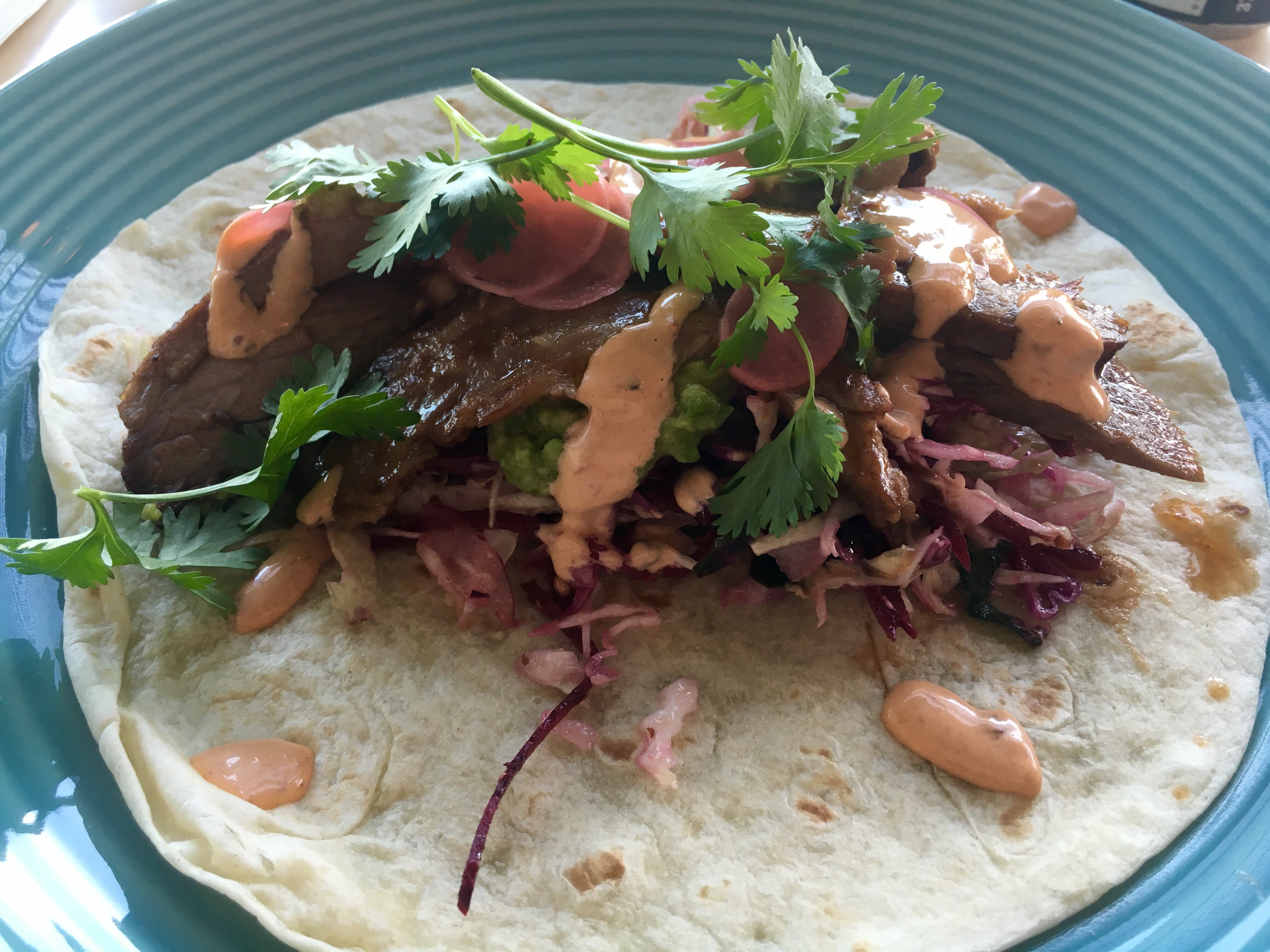 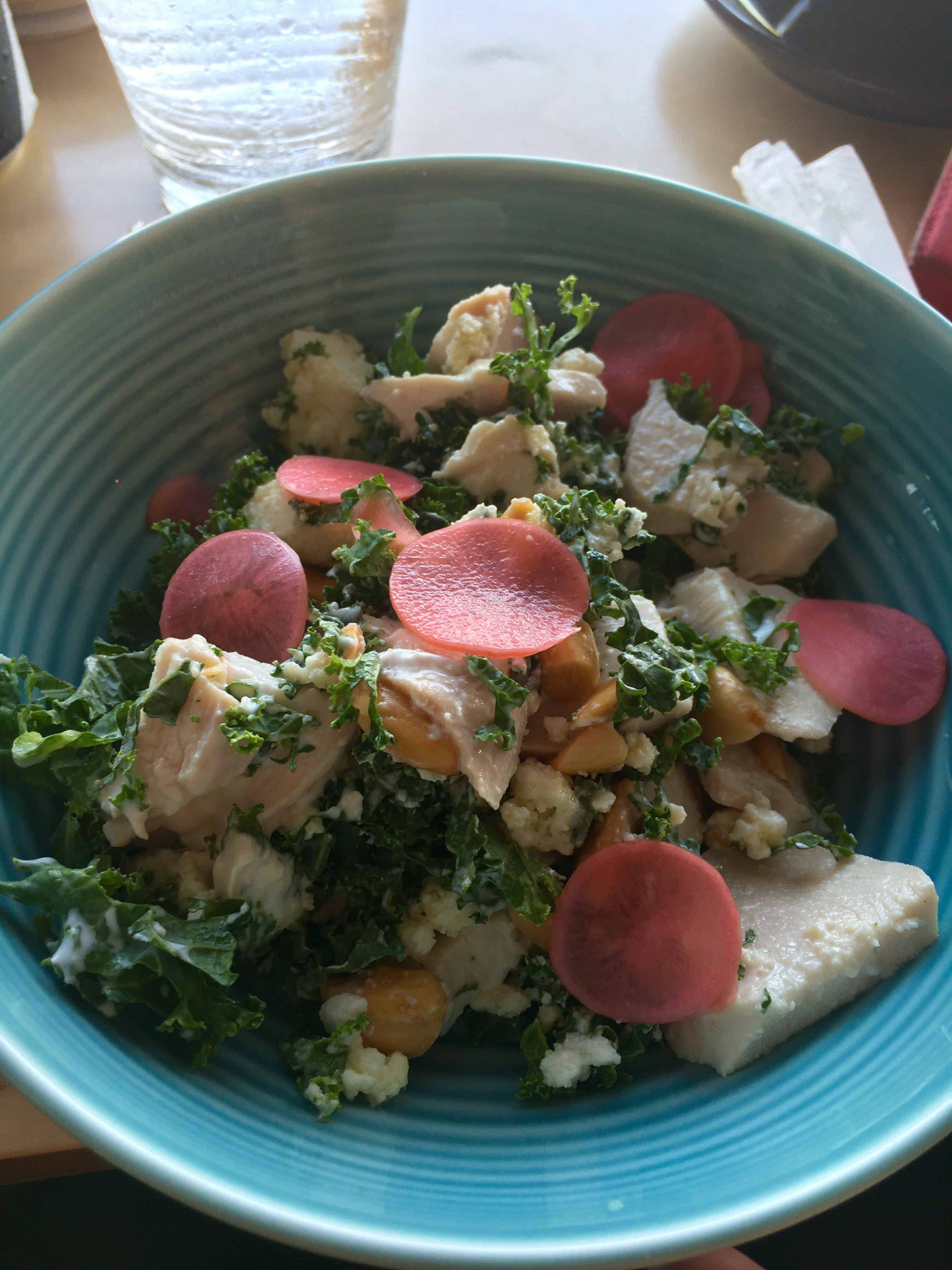 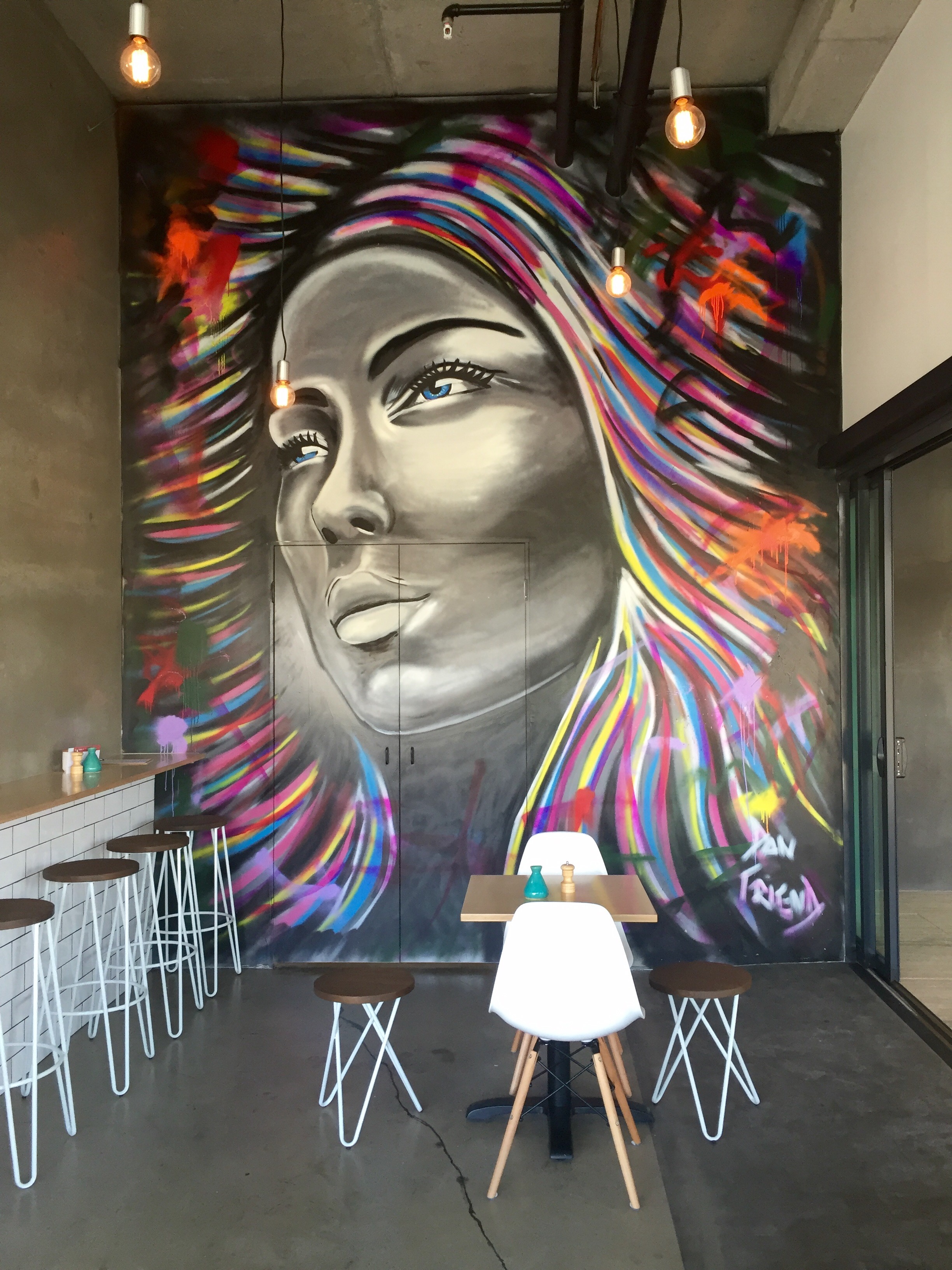 Sunset over the mountains 🏔 This spot was on

Sunset over the mountains 🏔 This spot was on