Having dined at Hippopotamus at QT Hotel (formerly Art Museum) with wonderful past experiences, it was disappointing to see such a decline in the service.
If this was a review purely on food, the restaurant would still sit very high in my books, however service accounts for much of the experience and they really let themselves down.

It was almost as if our table was just forgotten consistently. By the sommelier, the waitresses, the bar staff, the host. Other tables come and left while we were there over three hours.

They started off well. We were seated, poured water and drink orders taken. It took a while to get menus but they came eventually and followed closely by the amuse bouche. That was the end of the fast service, and the water filling now that I think of it.

With the help of the sommelier I had chosen an Italian red. They boast an extensive and international wine list, but only if you are buying by the bottle.

The amuse bouche was delightful, although I could not tell you what it was with the beautiful, thick French accents most of the staff have. It was salmon with poppy seeds and… a sauce, served with a sweet drink of cranberry and… other berries? It was fresh and light, a perfect start. Dad especially praised it to the wait staff to pass compliments to the Chef.

After asking for my water to be refilled three times with and without luck, I found the bottle and poured my own for the rest of the evening. At one stage the barman noticed I had tried to ask a waitress and she hadn’t heard so he came over to help. Great initiative but that was the end of it.

The bread took a long time to arrive (we thought they had forgotten), as did our entrees.

I had the King Ora salmon sashimi with soy jelly, wrapped in cucumber with wakame on top. Absolutely beautiful. The salmon melted in your mouth and the accompaniments went beautifully. Dad passed over two of his Bluff oysters, they were served shucked with the choice of a red or white wine dipping sauce. One oyster was questionable, the sauces had a nice tang to them.

We had another very long break while waiting for our mains. I chose the lamb rump and it was served perfectly rare. The eggplant was also lovely.

Earlier in the evening, Dad had enquired about what an item featured in one of the mains was, PicoPico (fern), and that he was interested in trying it. When his plate came out he couldn’t find the item on there, and asked the staff to point it out (it’s beautifully presented but you can’t tell what everything is) for him. The wait staff sheepishly came back over and explained it had been the most popular dish of the night and they had run out of the Pico Pico before he ordered. Considering this was why he had ordered that particular main and already enquired about that item, it was shocking to hear. Particularly as they hadn’t owned up to it earlier and wouldn’t have if it wasn’t questioned.

While we were at the table I had misplaced two rings. We were openly searching for them, with flashlights under the table and the staff came over during this time but never once asked if we needed help. I asked the barman to check downstairs which he said he would do immediately but then never came back to me.

I ordered the cheese for my dessert and the French cheeses were wonderful, as were the fig and pear that came with them. The sommelier helped my brother choose a limoncello to go with his dessert, the panna cotta, which although beautiful to look at, was unfortunately quite bland.

As you can imagine, with the four of us enjoying three courses each and multiple beverages, the bill was considerate. No words of condolances were expressed over the main muck up nor the long waits. In a place renowned for fine dining and where I have had many excellent experiences before, it was highly disappointing to have such poor service and I won’t be visiting again for some time. I hope it was just a one off. 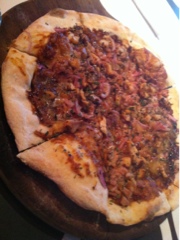 We headed in for a pre-nap snack after we checked in. Decided on a meat lovers pizza. Took quite a while to come out but delicious.

They also let us bring in our lemonade from the foyer which was nice.

We returned again later that night – a DJ was in full swing and lots of well dressed customers sipping on cocktails. We chose a lime pina-colada and I wasn’t very impressed at all. It was served in a martini glass and seemed to be almost all foam. 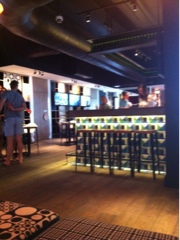 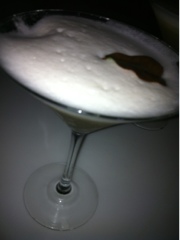